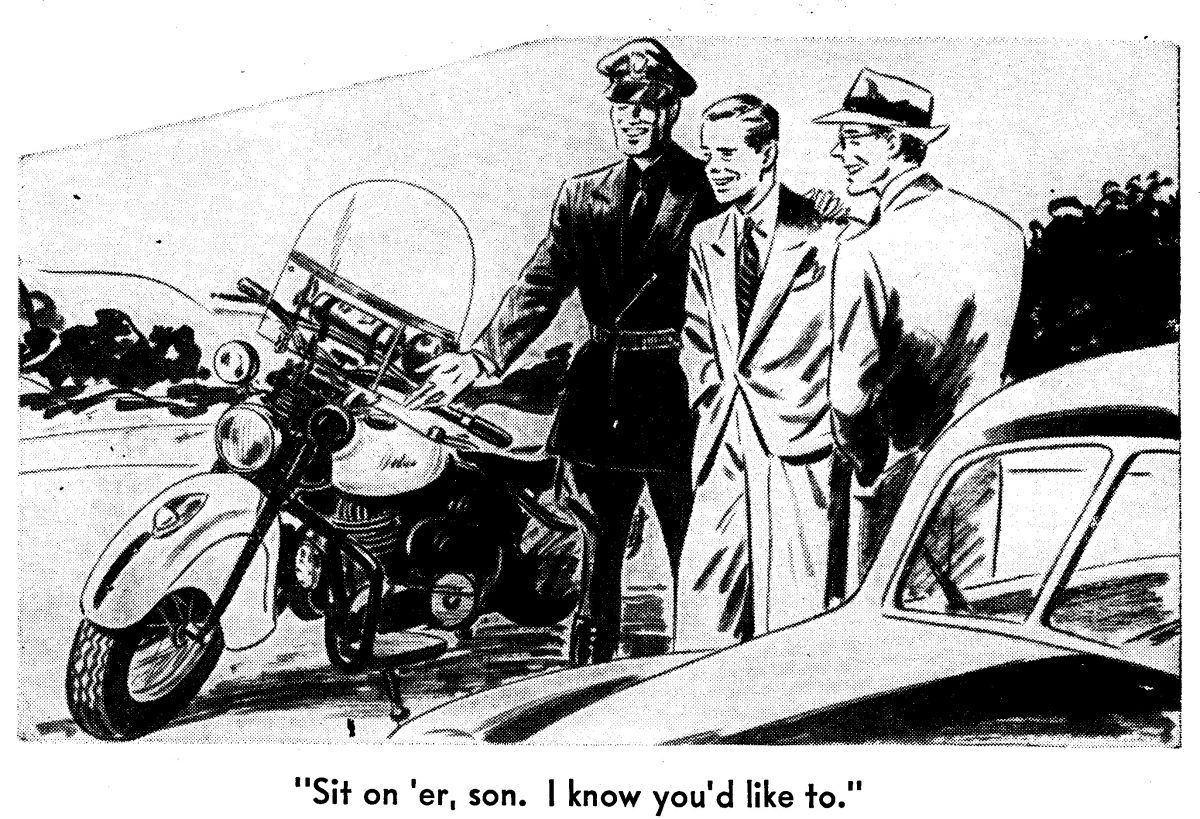 THE Doakes family (real names deleted just in case a certain cop has a memory like an elephant), Joe, the Missus and  eighteen-year-old Oscar      were burning up the state highway at twenty mph above legal par. With spring in the air and birds on the wing, Joe Doakes didn’t no­tice the motorcycle cop until the tell­tale putt-putt was hard aport.

“Pull over.” the uniformed intrud­er commanded. Doakes gulped and complied, his little woman muttering something pithy about the family budget. Coming to a halt. Joe wondered if there’d be any point in making the old college try at talking his way out of a ticket.

The cop was the impassive type. His face resembled a raw side of beef, When he spoke, his lips curled down. His entire manner defied Joe to try any tricks on hint. Doakes sighed and decided it was no use. The officer was silently thumbing open his fatal book.

Feeling the necessity of saying something, Joe stammered, “Sorry, Officer I’ll just have to take the blame for this one. We were talking and I . . uh . . . forgot to watch the needle.”

The reply was, “Mmmph!” THAT moment, .Joe’s eye fell At on the brand-new motorcycle the uncommunicative cop (now reading the number plate) had ridden up on. “Say, That’s a ‘ 48 Indian, isn’t it ?” “Yup . . . license an’ registration,” the cop muttered,

Joe handed them over, “Gosh, That’s a neat hike, You know, we’re buying one for our son. To tell you the truth though, we’re a little wor­ried he’ll be reckless with it. How’s this model?”

The cop’s pencil was poised over the book. It paused a split second, wavered and dropped. Something re­motely resembling a smile split his face. “She’s a beauty. Got the new silent kick starter, No more noisy clank -when you turn ‘er over, Be sure you get that for your boy!”

Doakes smiled appreciatively, “I sure will remember that. You . . . uh you wouldn’t care to give him few hints, would you .. . about safety first? I’d appreciate it.”

A shimmering halo of good will suddenly burst out all over the cop’s face. Ticket book and pencil disap­peared as if by magic. “Why, sure! Always glad to help a rookie out. He the boy?”

Propelled   jet-assisted by Mr. Doakes, young Oscar came hurtling out of the back seat grinning sheep­ishly, nodding, The big cop put an arm around his shoulder and drew hint over to the motorcycle “Sit on ‘er, son, Go ahead. I know you’d like to !”

OSCAR didn’t need urging. threw himself into the saddle and gripped the handlebars. “Boy,” he gulped. “Boy!”

The officer leaned over him. “Re­member when you get your own, Never let the clutch in too fast, If you do an’ you’re givin’ ‘er throttle the same time, she’ll buck up in front like a mule and kick you right off the back !”

Oscar nodded, Joe beamed approvingly. The cop continued. “Another thing. Don’t you be one of them throttle hounds. Some wise guys like to open and close the throttle real fast in traffic and make regular ma-chine-gun blasts, Makes backfires, see’. It ruins the bearings and the wristpins. No good for the valves, either,”

Pointing to the sidestand, he continued happily, “And for the luvva Mike remember to retract your stand when you get going, If you forget ‘er, the first left turn you make, you’ll he dumped on your squash!”

Oscar’s head was nodding like a piston. The cop scratched his nose and added, “Another thing don’t do.’ Don’t make no left turns with your knee hugging in too close, The handlebar locks in your foot an, then how 1n blazes can you disengage your clutch?”

“Remember all this, Oscar,” Joe Doakes commanded. The boy prom­ised on his honor. Their beefy in­structor kept talking in high gear.

“Yessir when you make any turn, Swing out that knee. Keeps it free an’ clear and gives ya balance. An­other thing, switch your engine off when you park any length of time. It’ she idles too long. she heats up. Don’t do her no good.” He consulted the back of his scalp with a finger. “Yeah, and don’t use the hand brake hard on a turn. It’ll spill ya, Just use ‘er when you’re runnin’ a straight line or she’ll slew the rear end around and throw ya right off.”

“I getcha!” Oscar gulped happily, “Good. And remember on the road, keep away from an auto’s blind spots, Either side of the rear-vision window is bad when you’re up close. Keep away from his right hand side altogether and the best thing is, give any car plenty off space and warning when you pass. Lots of angles he can’t see you an’ where does that leave ya if youre on his tail and he stops sud­den ?”

THE lecture took ten minutes. Finally, the cop grinned and said. .. “ That’ll start ya, I gotta he mosyin.” He began moving around the motor­cycle.

“Wh-What about the ticket?” Doakes gasped.

They watched him zoom off with a friendly wave of his hand, Getting back into the car, Joe managed, “When I tell ’em this at the office, they’ll never believe me !”

Waving after the disppearing motorcycle, Oscar put in, “I got his number Pop. If I don’t get my motor­cycle NOW, I’m gonna tell him you were kidding him!”

Joe glared and then broke into a smile. “You’ll get it, son, Just don’t forget what he told you, that’s all.” THE END