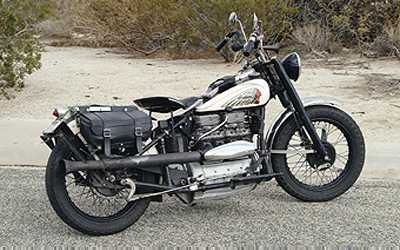 Being born in the LA area was a very fortunate happening for me. By 1933 at age 15, I already had my first motorcycle, a 1930 101 Scout. It wasn’t long before I got acquainted with the local “hounds,” as we were known then, and every week end we would be off to some event, usually a TT race, field event, or beer bust.

One of the favorite spots was about 15 miles east of LA at Sam Parriots’ in Puente Ranch. The LA 45 Club put on steak feeds and field meets at least twice a year and one of the big attractions was a straight, blacktop road that ran for a mile, then made a dogleg turn to the right, then left and up a hill. This was known as the Puente Strip.

By 1937, we would convene our motorcycles in “drag outs” or speed runs at least once a month on early Saturday mornings before there was any traffic. By 1939, Frank Christian had built an electric-eye timing clock so we could get accurate times. This was a great help to the local racers and speed-trialers to check their machines for performance. It was in October of 1941 and I left home early Saturday morning on my ’39 Indian Four, headed for Puente. The route was east on Valley Blvd to Fifth Street, in Puente, a right turn across some railroad tracks, then a left turn onto the strip.

As I came around the corner at about 30mph, I saw three machines just starting on a run. The one on the left was Ed Kretz on his #38 Sport Scout race bike, and the others were a couple of Harleys. I thought, why not see if I could catch them, so I pulled the Four back into second gear and got on it. I was gaining on all three, and soon passed the Harleys but Kretz was still ahead. I was slightly to the left of him and my front wheel was along side his rear wheel, both of us still in second at 75mph. Ed looked over his right shoulder, saw the Harleys behind him, snapped into high gear and laid down on the Scout. I did the same on my Four and the Scout started to pull away at 90mph. So I edged into his draft about three feet behind and managed to stay there at over 100mph. The immediate reaction after clearing the timing traps was to sit up and get on the brakes because that dogleg was pretty sharp at that speed.

So Kretz did the usual and turned around to see how far ahead he was of the Harleys. I still laugh when I think of the look on his face when he saw me three feet behind him! His eyes bugged out and almost pushed his goggles off! As we slowed, I came alongside of him and he said, :Where did you come from?” I said, “I was there all the time.” My speedometer stop-hand read 114mph and when we got back to the timer, we found out we had hit 112.50mph.

I later took the Four through at 108.43mph, without the benefit of the draft—this was just as I rode it on the streets—headlights, fenders, saddlebags, the works. Sam Parriot tried to talk me into talking off the extra garbage and trying again, but I was happy with that speed. Remember—this was 1941, when few machines would clock an honest 100mph.

Kretz asked me to take his Scout through and see what I could get out of it, as I was about 40 pounds lighter. It clocked exactly 112.50mph with me on it, too. This was the week before the big 200 mile race at Oakland. Kretz had the best qualifying time at 94mph on the very rough one mile track, paved with a low bank on the turns. Kretz, of course, had the pole and at the end of the first lap had a 200 foot lead, which kept increasing every lap until he lapped the second-place rider on the 32nd lap.

Soon after that, there was a very bad accident in the south turn, which resulted in two deaths and several others taken out of the race. How Ed didn’t go down is a miracle of some sort. Movies taken of the accident make you shake your head in wonder that Kretz didn’t end up in the pile of motorcycles sliding into the fence. Later, when asked how he got through, Ed said he closed his eyes and held on. Anyway, Ed managed to get through the mess without going down and lead until the 117th lap, when his front chain broke and put him out of the race. Front chains weren’t supposed to break on Indians with the oil bath but his did. I guess Indian must’ve gotten a batch of bad chains, improperly heat-treated.

Those were great days! As well as riding my ’39 Four on the streets and on trips, I also rode the Four in cross-country events like the Greenhorn 500-miler. I had the privilege of travelling with Ed Kretz, and sometimes Jimmy Kelly another good Indian rider. We usually piled into the car late on Saturday, and drove long, hard, and late at night to make some Sunday racemeet at some distance from LA. Many were the pranks and jokes. The world was our playground and we would never grow old.