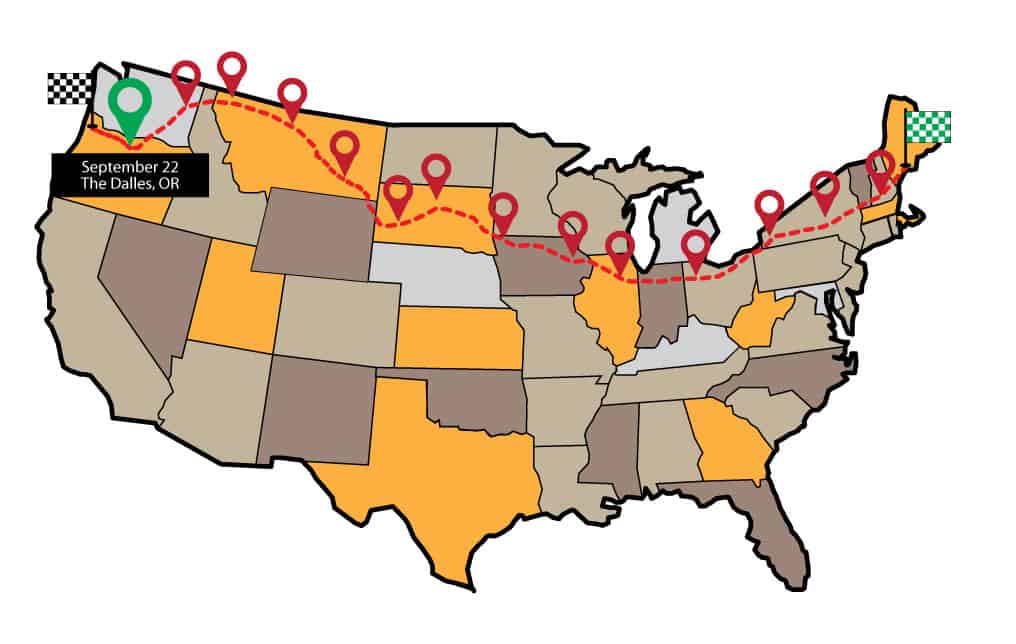 THE DALLES, WASHINGTON, Sept. 22—Today was the last full stage of the 2018 Cannonball, and the ride from Spokane Valley, Washington, to tonight’s stop in The Dalles provided a fitting final test for this coast-to-coast adventure. The ride was both scenic and challenging from beginning to end, just as this entire Cannonball has been since it started in Portland, Oregon, two weeks ago.

After the tight back roads of the East, made more difficult by rain that wiped out one entire stage of the Cannonball in New York, riders faced broiling heat across the endless farm fields of the Midwest and Great Plains. And then it was back to cold and rain across the spine of the Rocky Mountains in Montana and Idaho.

At 303 miles, today’s stage was the second-longest of the 15 days of competition. But that was just the beginning of the challenge. It also turned out to be surprisingly hilly, even though eastern Washington is not the part of the state known for its mountains.

John Classen, the coursemaster for the Cannonball, is renowned for his ability to find difficult hills almost anywhere, and for routing unsuspecting riders to them on underpowered old motorcycles. In New Hampshire, he located the appropriately named Rollercoaster Road. In Ohio, riders were astonished to find themselves on a route through Cuyahoga Valley National Park marked with a sign warning of a 17 percent grade. And before taking Cannonball competitors to 6,646 feet on the legendary Going to the Sun Road in Montana’s Glacier National Park, John snuck in an unnamed pass to the southeast that topped out even higher—at 7,393 feet.

John’s grade-finding talents were on full view today. While riders were still in Spokane this morning, they faced a city street so steep that three of the contenders in the single-cylinder, single-speed class—Dean Bordigioni, Chris Tribbey and Dan Emerson—all had to dismount and walk their bikes up the hill. Then came the rolling countryside of Washington’s eastern half, before the route dipped into the Columbia River Gorge at Kennewick for more ups and downs along the bluffs that make up the gorge.

But the biggest challenge of the day came in the form of constant, unrelenting wind whistling across the open landscape away from the river and funneling through the gorge. It was the sort of wind that seemed entirely capable of fighting a century-old motorcycle to a standstill.

And yet, riders fought through all that to discover a barren beauty to eastern Washington that is overshadowed by the Cascade Mountains and the Pacific coastline to the west. If Montana is Big Sky Country, eastern Washington qualifies as Big Landscape Country, with views that seem to stretch to the edge of the earth. Fighting crosswinds across that terrain, riders encountered open rangeland, where they had to share the pavement with wandering cattle, and small towns perfectly preserved from the time when many of these machines were made.

Dropping into the Columbia River Gorge, the winds only became more intense, raising whitecaps on the river and dust on the roadside. But with the late-afternoon sunshine reflecting off the water and exposing every feature of raw hillsides, the view was inspiring, even if the conditions were intimidating.

The day ended with a street fair in The Dalles, where city officials closed off one block of downtown to allow residents to mingle with the riders and learn about the Cannonball ride.

Amazingly, overall leader Dean Bordigioni and his 1914 Harley single were equal to every challenge. With Dean tucked into a racer crouch, the little machine never quit, hauling him once again to the finish line within the time limit. The same was true for Fred Wacker’s 1913 Indian and Andrea LaBarabara’s 1913 Henderson, meaning that the top three positions in the standings remain unchanged. The ranks of riders with a perfect score dwindled, however, as Dean Miskell and Dave Holzerland both dropped out with mechanical problems. That leaves 45 riders having earned a perfect 3,390 points this evening.

Tomorrow, those riders, and dozens of others who have fought through problems to get here, will climb aboard their bikes one more time and tackle a mostly ceremonial 51-mile stage to the finish at the Skamania Lodge in Stevenson, Washington, just across the river from Portland, Oregon. Yes, these miles will count, and a breakdown tomorrow means as much as it would any other day. But the goal is to get every rider to the finish so that we can celebrate another successful transcontinental crossing on two wheels. Here’s where you can catch up with the Cannonball Sunday: