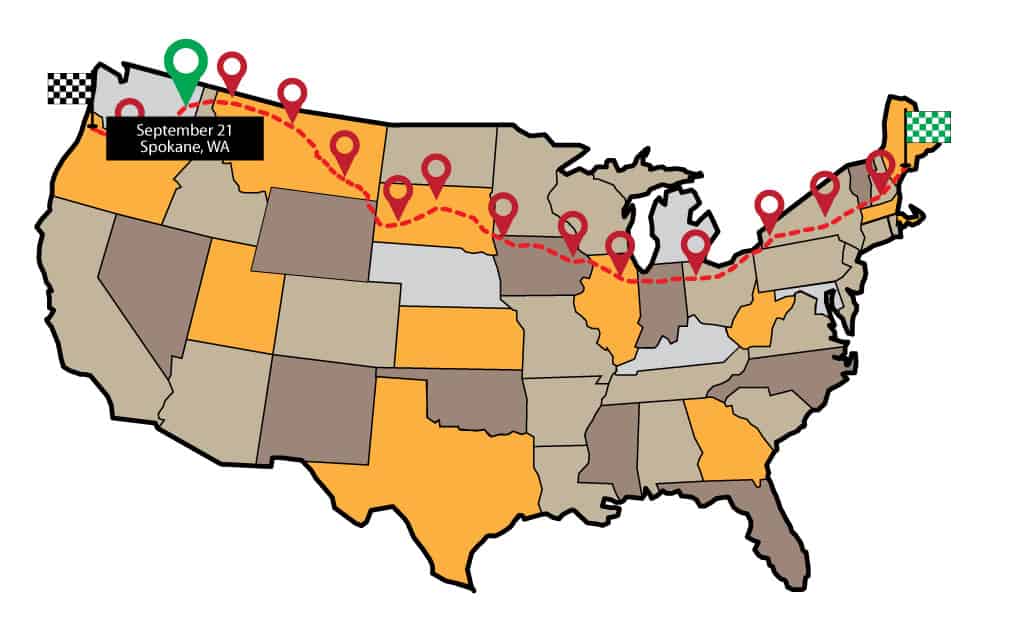 With more than 3,000 miles covered and just two days to go before this coast-to-coast adventure ends, the 2018 Motorcycle Cannonball endurance run appears to be headed toward a historic finish.

As of tonight, we have arrived in Spokane Valley, Washington, following a scenic 254-mile ride from Kalispell, Montana. Washington is the 14th state Cannonball riders have traversed since we left the Atlantic Ocean behind in Portland, Maine, two weeks ago. That leaves only one more state on our list before this journey concludes Sunday outside that other Portland—the one in Oregon that serves as a gateway to the Pacific Ocean. And as the remaining miles count down, Dean Bordigioni remains atop the overall standings aboard his 1914 single-cylinder, belt-drive Harley-Davidson.

Through the four previous Cannonball events, no Class I (single-cylinder, single-speed) machine has ever finished with a perfect score by covering every mile, every day within the prescribed time limit. Dean himself came closest in 2016 aboard this same ’14 Harley, ending up just a single point short of perfection when the bike required help to get over the summit of 10,857-foot Wolf Creek Pass in the Colorado Rockies.

Two days ago, before riders faced a trip over Logan Pass on the Going to the Sun Road in Glacier National Park, the toughest challenge of this year’s ride, Dean said, “If I can get through the mountains over the next couple of days, I think I’m looking pretty good.” Now, the Rockies are behind us, and Dean’s Harley keeps chugging along without missing a beat. Today, he had to stop to make a roadside carburetor fix, but he easily finished well within the time limit to move one step closer to the overall victory.

Meanwhile, Fred Wacker is on track to make history as well, having put together a perfect score on his 1913 Indian to hold down second place overall and first place in Class II (which combines multi-cylinder, single-speed bikes with single-cylinder, multi-speed bikes). If he can finish off that perfect run on Sunday, Fred would become the first person to successfully complete every mile of a Cannonball aboard a so-called Hedstrom Indian—one of the bikes based on the designs of company founder Oscar Hedstrom, which remained in production through 1915.

Actually, Fred appears likely to tie two other competitors for that honor, since Victor Boocock also has a perfect score through the first 13 stages, and Dave Volneck’s 1913 Indian has completed every mile so far, although Dave’s score reflects a deduction of 100 points for changing riders when he was called home following a death in the family.

Third place in the standings represents another bit of history. No woman rider has ever finished with a perfect score, but Andrea LaBarbara is currently on pace to end that streak aboard her 1913 Henderson. Andrea also seems likely to share that accomplishment with two other riders, since Kersten Heling (1922 Harley-Davidson) and Jody Perewitz (1926 Harley) also have completed every mile so far.

At this point, the only predictable part of the competition is Class III, where 2016 winner Steve DeCosa holds down first place aboard the same 1915 Harley-Davidson that he rode to victory two years ago. That time, Steve had to survive a final day in which his brakes failed and he literally had to stop the bike with shoe leather on the run to the finish in Carlsbad, California. This time, the bike suffered an exhaust valve failure that came along at the perfect moment—just as he was heading into Sturgis, South Dakota, for the rest day last week. Steve and his crew chief (and wife) Joan, completed the repair and he never missed a mile.

Also on course to make history is the entire Cannonball field. As of tonight, we still have an amazing 47 riders with a perfect score of 3,087 points. That seems likely to obliterate the previous record of 24 finishers with maximum points in 2014. In 2016, only 16 riders accomplished that feat, while the number was 19 in 2012 and just 10 in 2010.

Of course, we still have two stages to go—a long 303-mile day from Spokane Valley to The Dalles, Oregon, tomorrow, and a ceremonial 51-mile ride to the finish on Sunday. And as Dean Bordigioni has said, “First place only counts in the final mile.” But at this point, with the end nearly in sight, it seems likely that the 2018 Cannonball will be one for the record books.

While Dean, Fred and Andrea are on the verge of history, other riders have their sights set on personal goals they hope to achieve in this year’s Cannonball.

Take Ben Pierce, for instance. He has now strung together 1,558 miles aboard the 1923 Neracar he is riding in the competition. The bike’s owner, Bob Addis, is one of two riders who paired up to finish 1,253 miles aboard the 225cc two-stroke single in the 2014 ride, so Ben has now surpassed the little machine’s previous Cannonball record.

As Bob noted, though, the Neracar has been the subject of an intense development program in the years since its first appearance. Back in 2014, he says, they put the bike on a dyno and it produced exactly 1 horsepower. After several engine tweaks, it’s now putting out 1.3 horsepower. And for those who scoff at the additional three-tenths of a pony, Bob will remind you that’s a solid 30-percent improvement!

Meanwhile, Steve Rinker is going for a record of another sort. In 2014, Steve qualified as the final rider in the points standings to have finished with a perfect score. His position at the bottom of the list of those riders was based on the Cannonball’s tiebreaker system, which rewards riders on older, single-cylinder machines over newer, multi-cylinder bikes. That year, Steve’s 1936 Indian Chief was from the newest year allowed, and Steve himself lost the final tiebreaker, based on the age of the rider, by being younger than either of the other two competitors who finished all the miles on 1936 motorcycles.

We’ve been calling the unofficial award for the last-placed rider with a perfect score the Lanterne Rouge, based on a similar designation in bicycling’s Tour deFrance for the last-placed competitor still riding. The term is French for Red Lantern, and it refers to the lantern that would hang from the caboose on a French train to indicate the final car.

Steve immediately embraced the Lanterne Rouge idea, and in 2016, his son, Jared, took the honorary title aboard a 1916 Indian. Steve, also on a ’16 Indian, finished one spot higher than Jared because of the rider-age tiebreaker. And this year, Steve is once again holding down the final position among the 47 riders with 3,087 points since he’s the youngest perfect-score rider on a 1928 motorcycle, the newest year allowed this time. If he holds that position to the end, it will give the Rinker family three straight Lanterne Rouge awards.

And today, one of our support team members, Dave Jones, had a personal best of his own. Dave was riding his modern Harley sidecar rig, ready to help riders along the way, when he came upon Pat Patterson stopped just 33 miles into the day’s route with broken clutch rod on his 1926 Harley. Dave starting scouring the roadside for anything that might help, and he saw a rusty piece of metal barely within reach on the other side of a barbed-wire fence. Carefully reaching through, Dave snagged the piece, which turned out to be a near-perfect replacement for the Harley part. He and Pat zip-tied it into place, and it held up through the rest of the day’s ride.

For literally dozens of other riders, the goal is to complete all the miles from coast to coast. Or to make it to the finish line on a particularly hard day. Or to experience the entire breadth of America aboard a machine made more than 90 years ago. Or, as Class II leader Fred Wacker notes, to “have the ride of your life with a bunch of great people.”

All of those personal stories continue tomorrow, and here’s where you can catch up with the Cannonball on its 303-mile stage from Spokane Valley to The Dalles, Oregon: